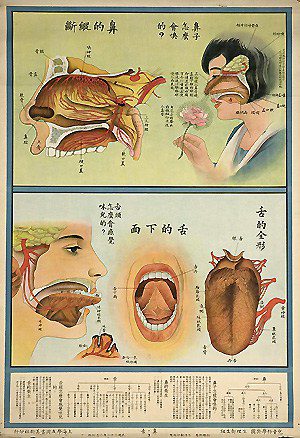 According to Traditional Chinese Medical (TCM) theory, it is believed that the disease is located in the lung, spleen, and stomach–especially the lung and spleen. It’s called simultaneous lung-spleen treatment (脾肺同治）.To begin, three quotes from the classics can help elucidate understanding of this concept. The Classic on Medical Problems, chapter 58 states,《难经·五十八难》 “There are five ways that cold pathogens can hurt the body: middle wind (stroke), cold, warm dampness, heat, and warm diseases, and they all cause different suffering.”2 Here, “warm-dampness” is regarded as an exogenous febrile disease. In Discrimination of Febrile Diseases 《温病条辨》states, “febrile diseases have wind, heat, plague, warm, toxic, heatstroke, damp, dry, cold, and malaria types.”3 It also states that epidemic patients who are endemic are extremely pestilent, which can easily spread from family to family. As can be seen, the main difference here refers to the concept of Qi, referring to the pathogens able to pass through air. According to The Yellow Emperor’s Classic on Internal Medicine, a plague can be classified according to the five movements of Qi4. Although the aforementioned epidemic types have different names, their pathogenesis is the same. They are all caused by the combination of “triple deficiency” (三虚相合), which have a sudden onset and high-death rate. Lastly, in The Theory of Pestilence 《温疫论》6, it describes that the pathway of the invasion of the pestilence is through the nose and mouth. As can be seen, the understanding of plagues were similar as that in Europe as can be remembered by the Plague Doctors who would wear crow masks due to the obsolete (according to conventional medicine) medical theory of miasma, where noxious wind was seen as the cause of infection.

The symptoms of COVID-19 include both those of Spleen-Stomach diseases, such as cough, fatigue, and muscle soreness. As TCM emphasizes a holistic concept of unification between all things, people are affected by changes around them. In December 2019, Wuhan, which is abundant with water, the winter was colder than usual.So, TCM analysis also includes this concept, understanding that the wetness of the environment could play a factor in the disease and should also be considered for diagnosis and treatment.

As stated in 《温热论》7 Theory of Warm-Heat, warm pathogens attack from the top–first the lung and then the pericardium. As the nose is the orifice of the lung and highest of all TCM organs as well as governing the skin, the pathway of COVID-19 is expected to affect the lung. As the first symptoms of COVID-19 include fever and a dry cough, it is further suggested that the disease begins its assault on the lungs, and during that time, the disease should be treated there (see our previous post about lung-clearing and detoxifying decoction (清肺排毒汤). In TCM physiology, when the function of the stomach-spleen are compromised, the movement of liquids within the body is affected, resulting in fluid filling the lungs, which brings the discussion to the spleen-lung connection.

The connection between the spleen and lung by their connection with water metabolism. Importantly, the spleen separates the clean from the turbid, letting the clean ascend and descending the turbid. When compromised, the turbid may ascend, infecting the lungs. Thus, in order to harmonize the organs’ function and mutual cooperation and restraint, the two can be treated at the same time. To see a case study which illustrates this visit: www.tcmquarterly.com/announcements