First of all Qi, Ki and Chi are all the same word just variations of Chinese and Japanese and ways that the West has written it in (their/our) letters. In Chinese Mandarin its more or less pronounced like “Cheeeese” while taking a picture but without the “Z” at the end.

In Chinese, the word is combined in endless variations to make other words and concepts.

is how its written now in mainland China.

is how it was written in China and still used in Taiwan.

Here is a segment of an entire chapter on qi that I wrote for Fundamentals of Chinese Medicine (PMPH press):

“Qi in ancient Chinese philosophy refers to an invisible and extremely fine substance that is in constant motion. The initial connotation for qi was that of a cloud floating in the sky. By observing the motions of the clouds (ascending, descending, accumulating and dispersing), Chinese philosophers formulated a concept that all substances in nature that have form are generated by a formless substance that is in continual and endless motion. This substance is qi. These early philosophers also perceived the existence and influence of qi in the body by observing the phenomena of human life such as the qi of breathing, hot qi over the body during exercise, and so on. After further considering cloud-qi and water-qi, as well as breathing qi and the hot qi of the body, additional general concepts of qi and its nature were formed. They postulated that qi begins as an extremely fine substance with no form and is in perpetual motion. As qi accumulates, it acquires form, and is thus responsible for creating all the physical manifestations we perceive in the universe. 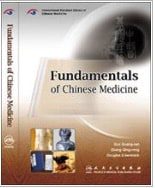 Though physical objects and the extremely fine invisible substance moving around them are both forms of essential qi, the invisible form is considered the basic state of existence for essential qi. This version of essential qi is what is usually referred to as “qi”, while the qi that accumulates and is in a relatively stable and tangible state is named “form” (xíng, 形). Formless essential qi is extremely fine, and is in a constant state of dispersion and motion; it is considered “intangible” or “formless” because it cannot (usually) be seen with the naked eye. When this invisible and intangible essential qi accumulates, it becomes a stable form, which then can be seen and identified as a tangible “thing” or object.

Formless qi connects everything as a coordinated and unified whole, which is in constant motion; it exists both within and without, filling the entire world of things. Formless qi penetrates into all forms, and activates the qi that has formed into an object. So, qi is not only a material or element that constitutes all things in the universe, but is also an intermediary through which all things in the world communicate, interconnect and interact with each other. As one of the universal things existing within this integrated whole, the human being also responds to changes in the order of things, however slight or subtle the change may be.” Now back to earth with more questions: